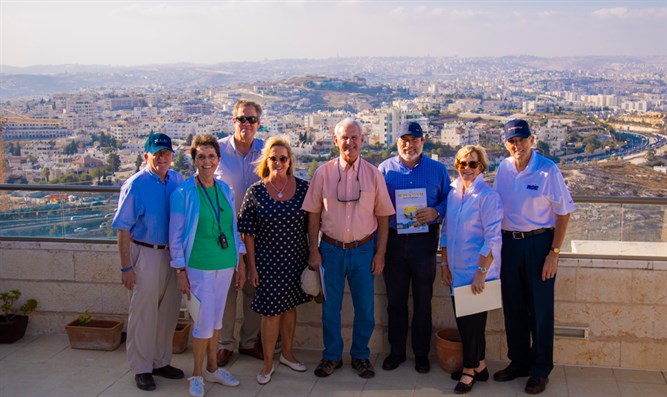 Members of Congress speak on Capitol Hill of ‘untold story of hope and opportunity’ for Israelis and PA Arabs.

Several members of Congress spoke on the floor of the US House of Representatives last week to recount their experiences of an “untold story of hope and opportunity” that they encountered in Israel this past August.

The members of Congress had traveled to Israel on a Congressional tour that was sponsored by the US Israel Education Association (USIEA), which is led by its executive director, Heather Johnston.

Particularly novel and intriguing for the members of Congress on this delegation were the horizontal business relationships between Israelis and Palestinian Authority (PA) Arabs, which they saw on the ground and in action.

Delegation participant and Congresswoman Ann Wagner (MO) related:“We saw firsthand Israelis and Palestinians working together to promote peace and harmony… Many of the Palestinians were making between 3 and 4 times what they would otherwise earn if they did not have this opportunity to have this integrated business that we saw going on in Israel. They were standing up to what I would call strong divisive forces that seek to vilify Israel and undermine its credibility as a force for peace.”

Congressman Phil Roe (TN), who also attended the trip, said: “You saw people, not nations, working together to make life better for their community.” The congressman intends to bolster and to help build on such cooperation by introducing both Israeli and PA Arab business leaders to various chambers of commerce in the US.

Already facilitating the Israeli and PA Arab business leaders with such efforts is the Judea and Samaria Chamber of Commerce and Industry (JS Chamber), which works to promote and facilitate mutual business partnerships between Israelis and Arabs in the area The JS Chamber is led by an Israeli resident of Ariel, Avi Zimmerman and by an Arab clan leader and businessman, Ashraf Jabari from Hevron. Founded in October of 2017, the JS Chamber’s members include 250 Israeli business leaders with another 250 of their PA Arab counterparts and another 100 PA Arab entrepreneurs.

Echoing Congressman Roe’s remarks was colleague and fellow delegation member, Congressman Bradley Byrne (AL): “It is good for Palestinians to be able to take advantage of the miracle of the Israeli economy. Giving them that opportunity so that they can have a better life for them and their families is hope. Sheikh Jabari and what he’s trying to do is hope. I hope that we in this country and we in this Congress do everything in our power to help these people grow economically in their businesses but also to find that peace that only people-to-people actions can find for us all.”

Congresswoman Cathy McMorris Rodgers (WA), who serves as a Congressional representative to the United Nations General Assembly, led the Congressional delegation and said: “I have traveled with the USIEA before and I am grateful for them leading these trips especially behind the ‘Green Line,’ into Judea and Samaria and taking members of Congress, both from the House and the Senate, Republicans and Democrats, to be able to see it for themselves.”

“We were witnessing amazing cooperation between the Palestinians and the Israelis. For me, I just feel like it is the untold story. It is a story about opportunity and hope at a time when too many despair. It was the Palestinian business leaders and workers who told us that BDS hurts their ability to work and to provide for their families. They want economic freedom, not boycotts.”

Motivated and inspired by what they saw, McMorris Rodgers and the members of the delegation intend to lobby the White House regarding the importance of making such a business model a key aspect in any peace plan between Israel and the PA Arabs.

The USIEA, which had introduced US Ambassador to Israel, David Friedman to a number of joint PA and Israeli business ventures in the region, also organized with the JS Chamber, an Israeli-PA economic forum in Jerusalem this past February. Attending the forum were dozens of PA Mukhtars and Israeli heads of local councils in Judea and Samaria, all of whom came with the goal of promoting mutual cooperation on the local and municipal levels.

Addressing the forum then, Ambassador Friedman had said: “Political solutions are important, but pieces of paper are not creating peace, relations create peace, investments create peace, friendships create peace, this is the peace that will last, that is the kind of peace that is sustainable.”

Giving Congress a New Perspective on Judea and Samaria