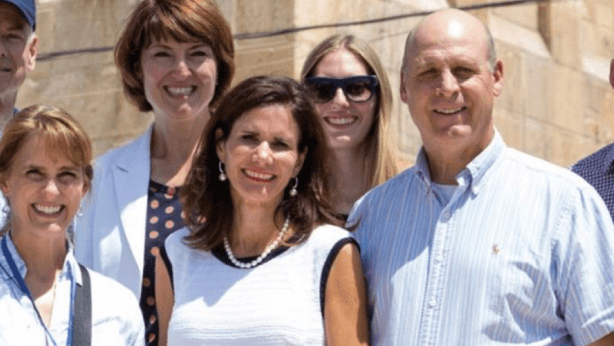 An interview with Heather Johnston, executive director of the US-Israel Education Association.

With her soft Alabama accent and proper Southern manners, Heather Johnston makes for an unassuming trailblazer.

And yet, over the past eight years, she has quietly helped to bring about a sea change on Capitol Hill. By pioneering trips for senior congressional leaders to Judea and Samaria, where they see firsthand the reality on the ground, and highlighting issues such as economic integration between Jews and Palestinians, Johnston’s US Israel Education Association has steered the narrative toward constructive themes of cooperation rather than conflict.

In an interview with the Magazine, Johnston elaborated on why it is so crucial for senior US decision-makers not merely to read about issues relating to Judea and Samaria but also to come and see for themselves.

How did you and your husband become active on behalf of Israel?

We first got involved with Israel back in 1997. On our first trip, we met Ron Nachman, the founder and mayor of the City of Ariel. At the time, Jews were pouring into Israel from Argentina and Russia, so there were absorption centers everywhere, and it was a time of accelerated growth and great need.

We had been reading the biblical prophecies as it pertained to modern Israel, and it just seemed very obvious to us that the words of Jeremiah 31:4 were being realized: “You shall again plant vineyards in the mountains of Samaria.” And Verse 7: “I will bring them from the north country and gather them from the uttermost parts of the earth… a large community shall return here.” All you had to do was go to the absorption centers and see the influx of Russian Jews into Israel, and realize that it was reflected in these verses.

So I think our hearts were filled with love as we understood what God was doing, and that was what cemented our commitment to say, “God, we’ll do whatever you want us to.”

So where did you start?

We didn’t know exactly where to start. We just began building a relationship with Nachman and it was immediately clear that there were various financial needs, such as purchasing computers for the schools, and helping build a radio station for the city. So we established a nonprofit to do that, and it just became an important relationship to us. We made Israel a priority because we felt it was God’s priority.

How did you become involved in bringing high-level congressional delegations to Israel and why do you devote some of the trip to going through the West Bank? We built upon the relationship with Nachman, who became a real mentor to me as we were involved in helping his city.

I began to think about education trips for senior leaders, the decision-makers on the US House committees relevant to Israel, because at that point, Congress was not traveling through the West Bank. A friend arranged a meeting for me with Rep. Eric Cantor, the House majority leader at the time, and he was already looking for a trip like this, so we set sail on this idea. He helped to populate our first congressional tour in 2011.

I just knew we needed to keep strengthening the US-Israel collaboration in the areas of technology, commerce and defense. Our organization, US Israel Education Association (USIEA), took the first group of US congressional leaders to see Israel’s Iron Dome, which became an impetus for the accelerated defense missile collaboration between the US and Israel.

But surely there are plenty of groups that already bring US senators and congressmen to Israel, so what else makes your organization different?

Of course, there are incredible organizations. Take AIPAC, for example. They bring every freshman congressman on an introductory trip to Israel so they can better understand America’s No. 1 ally in the Middle East. They also educate and lobby Congress on major issues like the Iran nuclear deal.

USIEA is more narrow and targeted with education; we bring the chairpersons and ranking members of the relevant committees related to Israel, along with their spouses. Our tours have become significant to senior level leaders. To date we have brought most of the senior leadership of the US House on an advanced education trip to Israel.

I knew that on these trips we should spend two of the seven days in the West Bank. Fewer than 1% of US congressmen had ever crossed the Green Line to visit a Jewish community, yet the US had been leading the Middle East peace process for decades. So the obvious question was: How could Congress be a support or balance of power to any US administration with almost no understanding of the true narrative inside the West Bank? Only a very few had been given the opportunity to meet Israelis and Palestinians living in that area, and the demographic realities had not been evaluated by Congress.

The US State Department did not – and still does not – permit official US congressional visits to the Jewish communities of the West Bank on their government-sponsored trips. For a congressman to visit there, they must go on a private tour.

It is important to note that when we go through the West Bank, we give the whole situation a fair hearing. There’s not a Republican or Democrat that would feel uncomfortable on our trip. They are get to see everything that they want to see, everything they need to see, and USIEA gives them an opportunity to make better-informed decisions when they return to Washington. Our mission is education. Members get a chance to study the issues firsthand and gain an understanding of what is actually going on.

What impact did the visit through the West Bank have on the congressional leaders? How did it affect their view of the situation?

I think the only way to describe it was that it was a paradigm shift. To visit Barkan Industrial Park in Ariel and see thousands of Palestinians and Israelis working together side by side in business was shocking. And to see thriving Jewish cities rather than settlers living in tents had a profound impact. If someone drives into Ariel, Efrat, or Ma’aleh Adumim today, they will see large cities.

Standing on the hills where Joshua and Caleb are buried, the members were able to see how close Tel Aviv is to the Green Line. This was another fundamental change of thinking for many leaders, seeing for themselves Israel’s strategic depth, which only underlined the impossible situation Israel would have in defending their nation if they were to give up all of the West Bank.

We took the members to meet with mayors and business leaders in that area. Our organization also took the very first congressional mission to Hebron, the second-holiest site of the Jewish people. They were highly impacted by the Jewish and Palestinian families who live there.
They also visited a few refugee camps, and many realized that the perpetuation of the refugee situation is not in the interest of the Palestinians, nor Israel or the US. The refugee issue has long been a propaganda tool for the Palestinian leadership, and I think that was obvious to the members of Congress during our discussions with the local Palestinian population, many of whom want to work with, and lead normal lives with, the Israelis.

Recently, freshman Democratic Rep. Ilhan Omar from Minnesota has been called out for repeatedly making antisemitic and anti-Israel statements. How concerned should Israel and its supporters be that such voices are in Congress?

I don’t think I would worry very much about the antisemitic voices in the Congress. We have such a strong, bipartisan pro-Israel Congress. The marginal voices come and go.

What types of meetings have you organized with Palestinians?
Just last month, we organized an international economic forum with Palestinians and Israelis. It was the first of its kind, where you had the mukhtars from Palestinian villages and Jewish mayors all together in the same room to discuss economic cooperation.

You also had the Israeli and Palestinian regional business leaders present, who formed the Judea and Samaria Chamber of Commerce. That included Sheikh Ashraf Jabari of Hebron, one

of the prominent Palestinian families in that city, as well as Avi Zimmerman from Ariel, who serves as president of the Judea and Samaria Chamber of Commerce. Also in attendance were Ambassador David Friedman and Sen. James Lankford, who is playing an important role in Congress toward the restructuring of how US funding is distributed and utilized in the West Bank.

How does the Palestinian Authority view such efforts to build economic cooperation between Jews and Palestinians in the West Bank?

I don’t know exactly where all of this will lead to, but it would be wonderful if the PA would allow integrated business. It is the real hope for Palestinians, whether they have statehood or not. It’s very simple. They want to prosper.

So you believe things are starting to change on the ground among Palestinians?

Yes, it is definitely changing. Many Palestinians are still afraid, but they are taking more risks, as some of the leading Palestinian business families move integrated business forward.

Why do so many US Christians like yourself seem to care so much for Israel? It’s a growing momentum. Christians are more educated. You have organizations such as Christians United for Israel and others that have done an extraordinary job of educating and informing Christians in the US and even around the world. While antisemitism seems so fierce in many places, there is definitely a shift among Christians worldwide towards standing with Israel.

This was anticipated by Israel’s prophets. Zechariah 8:22-3 says, “Many powerful men and nations will seek the Lord in Jerusalem and entreat His favor there,” and 10 men from the nations will take hold of the garment of a Jew and say, “We will go with you, for we have heard that God is with you.” Isaiah 49:22 says that the Gentiles will play a significant role in Israel’s restoration as a nation. “I will beckon to the nations and raise a banner to the nations. They will carry you….”

So rather than be surprised by this development of Gentile believers participating in Israel’s rebuilding, we should understand that it was anticipated as part of God’s plan.

I believe that standing with Israel benefits America, and any nation for that matter. America’s national fortunes, our character as a nation, our privileged place in the world, our military strength, is inextricably linked to how we take care of Israel, which is a result of the eternal covenant that God made with Abraham that those who bless him and his descendants will win for themselves the blessings of God.